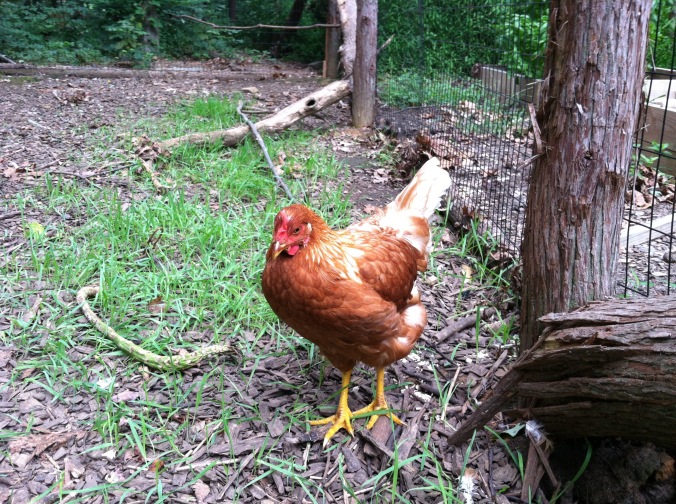 On the same day that I accidentally killed one of my hens in the midst of giving her a  bath for her infection, I discovered that my all-time favorite chicken had randomly passed away in the evening. She was my only chicken with a name. Phoenix had achieved some fleeting internet fame when she survived a fox attack and was left for dead. I was on vacation at family camp when it happened; the late August full-moon gave the fox the light she needed.

My dog sitter had arrived that morning to walk the dogs. She noticed the disarray in the coop, and on further inspection, discovered the neatly stacked hens in the sleeping quarters that the fox had probably planned to collect later. After the initial shock wore off, we chatted about what to do.

“We can’t just leave the dead chickens in the coop,” I said to her on the phone, the humidity from the latest heat wave already sinking into the day. I imagined the impending fly invasion to my backyard.

“But I don’t know anyone who would come bury dead chickens,” I continued, thinking aloud. “Who does someone call in this circumstance?” I was stymied.

She said she didn’t know anyone either. There was a pause.

“I usually just do everything myself,” she said. I took that as the opening I desperately needed.

I couldn’t come home to decomposed chickens. Plus, my dogs would get at them. And I knew dogs could die from eating chicken bones. This situation was getting more and more complicated. Please, please say yes, I silently willed her.

“Well, I guess I could bury them,” she said after pausing too long.

“Thank you,” I rushed to say, not giving her any chance to change her mind. “I am so grateful,” I repeated two or three times.

I was doing some yoga on the basketball court when the phone rang again.

“Megan, the red chicken is still alive.” It was the dog sitter.

“Yes,” she answered, “my son came to help me and he noticed a faint heartbeat as he picked her up.”

Damn, I thought to myself. What am I supposed to do about a half-dead chicken?

“Hmm,” I finally made a noise.  “I’m not sure what to do. Are you really sure?” I asked again, hoping she was mistaken. After she repeated that indeed there was a faint heartbeat a third time, I said

“Let me call my vet.” I didn’t get very far. The receptionist said that they “didn’t handle chickens” but I could try another one in the next town over. I explained the situation a second time to a receptionist I had never met.

“Yes, we can look at your chicken,” she said. “What is the name of the pet?” she asked.

I called the dog sitter back. She was more than happy to bring the chicken to the vet. As I told her ‘thank you,’ I was secretly adding up the amount of money she would charge me to transport the chicken. She had already wrapped the chicken in a nice blanket and was petting her.

“Alright, well, let me know how it goes when you get there,” I said.

An hour later I hadn’t heard anything so I called her again.
“The vet agreed that the neck was not broken,” the dog sitter told me. “He thinks there is a pretty good chance the hen will make it. I left her there and will visit later,” she said.

“You left the chicken at the vet?” I repeated. I decided to call the vet myself.

“Oh, yes, your chicken is doing very well. We have her on oxygen,” the receptionist told me.

“Oxygen?” I repeated for clarification. “You have oxygen for chickens?”

My brother overheard me on the phone.“Your chicken is on oxygen?” he said in the tone that he saves for situations of ultimate disbelief.

“Do you understand how much F****ing money that is going to cost you?”

I walked back to the area of camp that had a little cell service while trying to think of what to tell the vet and the dog sitter. Just the week before I had spent only fifteen dollars for two pounds of chicken for dinner. Nothing about the situation was making any clear sense.

But I wanted to be a good person and I didn’t want to be crazy. There was no way to win.

“Hi,” I said to the vet receptionist. “This is Megan, again, about the chicken. Listen. How much is the oxygen going to cost?”

Before she finished, I interrupted her.

“My limit is fifty dollars,” I said.

It was the most reasonable amount I could think of in the heat of the moment. I knew it was common for people to pay thousands for their pets. But my chicken wasn’t really a pet but, now, the dog sitter had driven the chicken to the vet and I felt an obligation to do something. And now I had the chicken transportation fee to consider.

I called my mother next who lived in a town nearby.

“Can you go pick up my chicken at the vet,” I asked her after filling her in, “and just put her in the bathtub until I get home?” I only had a few more days at camp. I figured she could handle things until then and then I could extricate my dog sitter from the situation who was planning to visit the chicken later that afternoon. At least that would be a small savings.

Phoenix lasted in the bathtub just fine under my mom’s doting care but my father called me at camp the following day.

“The whole house smells like chicken and we are going to catch Salmonella,” he yelled into the phone.  “You need to get home and pick her up.”

I told him that I didn’t think he could “catch Salmonella in the air.”

“Well we are going to catch something, he replied. You can smell it through the whole house.”

“Dad, she isn’t sick, she is injured,” I said, hoping I could convince him not to kick out the chicken.

Two days later, when I finally did make it home, Phoenix was in the cat carrying cage on my doorstep. She still couldn’t lift her head but she was eating the small drops of soft food my mom squirted into her beak three times a day.

Phoenix miraculously recovered after about a month of rehabilitation. By then I had acquired my next flock of chicks and when I set her in the coop to re-acclimate her to life outside the garage, she sat on top of their cage like she was their actual mother hen. By then Phoenix really did feel like a pet. 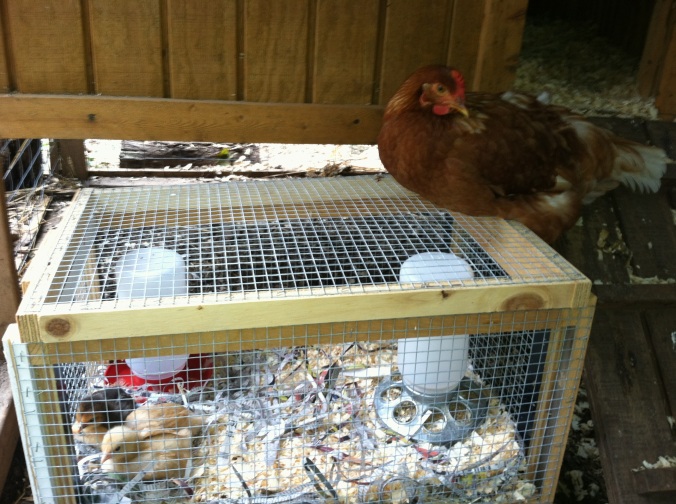 So finding Phoenix, randomly dead on the same day that I accidentally killed one of the other chickens from the ill-conceived bath, was startling. She had turned out to be my best egg-layer for nearly two years after the fox slaughter, even though chickens often don’t lay after traumatizing experiences. She was hardy in every way. It was as if she was as shocked as me that I had killed one of her flock. There was just no other explanation.

7 thoughts on “Phoenix, the Backyard Chicken”