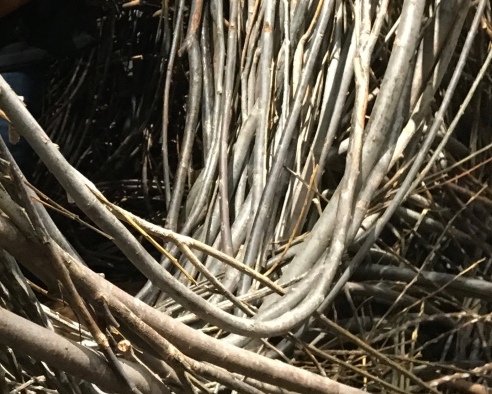 Empty Nest, when I say it quickly, sounds to me like the word emptiness. Emptiness means something is missing; as if there was once something there and it needs to be found. Like an empty nest which lost the birds, abandoned. I imagine a little round pile of sticks and branches, carefully placed, so much nesting and preparation. Now what?

Ernest Hemingway, in A Moveable Feast, points out, rather straightforwardly, that “everything good and bad left an emptiness when it stopped,” an observation that hit home for me in my quieting house. Busy years of raising little kids had good and bad parts. Of course, as they left, there was some emptiness. Hemingway also writes that when the emptiness came after something stopped that was bad, it “filled up by itself.” But good things could only be filled by “finding something better.”
Could there be something better than raising kids well? Would I carry around this heavy emptiness forever?

I have thought about it a lot since my nest started shifting. Two of my four kids are in college, and one of them is a senior. The other ones are rapidly catching up. That uncomfortable feeling of emptiness was with me when I stumbled upon Hemingway’s words. And I was struck by how he made it sound so simple. Just fill that emptiness that came from something good with something better. I read those words when I was in the midst of filling that emptiness with anything I could find, anything that would just take time.

I found the basement first. I had put off organizing it for years. Now that my children were grown, it was time to get things under control. I started with puzzles one rainy afternoon. I spread them out on the dusty ping-pong table and put them together so I could finally sort and discard the ones which were permanently missing pieces. The puzzles were on a bookshelf next to a little wooden boat with Playmobil figures still attached by rope to the rescue ladder. I could still hear the childhood voices of my boys. They echoed in the lonely silence of the concrete walls. And they did not keep me company — those voices; they ever so slightly haunted me. If I had I read Hemingway earlier, I would have realized that cleaning a basement does not fill emptiness that came from something good with something better. I would have realized that cleaning a basement could not have filled my empty feeling inside. The basement would have to wait until the grown up children came home to help, I decided, much to my husband’s disappointment.

Another thing I tried was more exercise. I had more spare time at the beginning and end of each day. It was my chance to finally get in shape. For years, my working out schedule revolved around everyone else’s needs. I fit it in here and there. But within a short few months of my new regime, I developed a torn labrum in my hip from overuse by the mere act of excessive walking. My body paid the price for the twelve miles daily to help my mind. When my hip started to hurt, I moved on to tennis. But then I got a shoulder injury from practicing my serve over and over again because nobody was home waiting for dinner. Nothing was there to stop me. These lessons taught me that my kids had actually been safeguarding my body all those years. Injuries do not replace emptiness.
I also used my extra free time to think about my kids who had left. For instance, there was a particular Saturday morning when I knew my oldest was on a weekend trip. I tried to check in with him to see how the long drive was going and if he had arrived safely. Trouble was, I could not reach him. It became a weird sort of scavenger hunt for me to track him down — first I called a friend of a friend who gave me the number of a family who also had a son on the trip. I knew that I was on the wrong track when I woke up a complete stranger’s brother and asked him for the phone number I needed. I tried to identify myself. He was groggy and confused. I felt like a weird stalker. When I finally reached my son I realized just how agitated I had become. He was totally fine. His phone had died. I thought back to my college days and how we only called our parents on Sundays from the hall phone. Worry did nothing to help emptiness. In mathematical terms I thought of worry as emptiness squared.

After nearly three years of these sorts of missteps, I found some better footing. One of them was signing up to be a Court Appointed Special Advocate (CASA). It is a national program which pairs volunteers to work directly with children who have been neglected or abused. A CASA volunteer might visit their child once a month and will advocate for their needs. A CASA will also attend court hearings and submit recommendations to the court that advocates on behalf of the best interests of the child. These volunteers become touchpoints for children in transition; relationships develop. It made me hopeful to think I could possibly impact the life of a child who needed someone.
Expanding my own mind has also helped. In fact, paying attention to that feeling of envy I experienced when I helped my kids choose interesting college classes spurred me into signing up for some classes of my own-both online and over weekend retreats. I met people of all ages and backgrounds — and better yet, none of them knew my kids or me in the context of mothering. It was a switch I needed. Many of my relationships had origins in child-raising — parents I met in preschool, at the Home/School Association Meetings, or on the soccer sidelines. It was refreshing to talk and learn from people who I might have never met. My world stopped contracting.

And, finally, I rediscovered cooking for pleasure after years of basing meals around schedules and food preferences. I even began a project to save the recipes that my family had loved over the years. The timing was perfect for my oldest child who was getting ready to live on his own. Every time I made something I remembered them enjoying I took the time to write it down. My recipes were transferred out of all those magazines I had saved over time, they were rescued from the tattered pages of my cookbooks. It felt like I was preserving our family’s past while putting down roots for the future.
I have decided that the words Empty Nest do not serve me. Nor does emptiness
In my mind I have decided to change the name to Open Nest. Open Nest, when I say it quickly, sounds like Openness.
Openness feels hopeful and optimistic, an opening to something bigger. Openness to any future birds that might want to drop on by. Nothing is missing. But there are some openings.

I am open to filling them up.