Two days after my mom and I culled the disorganized racks of a post-holiday sweater sale, I needed her guidance with a sweater I’d been knitting for Andy, my college age son. It was the afternoon before he needed to go back when I called her for help.

“We are really down to the wire,” she said on the phone.

I had started the project, a year before, when I found out that he would be at a cold weather school, nine hours away, and needed a way to deal with my first throes of nostalgia. The current sweater was my second attempt; the first came out too small. I was at an impasse because I was trying to figure out how to do a crew neck without a pattern. For this I needed my mom. 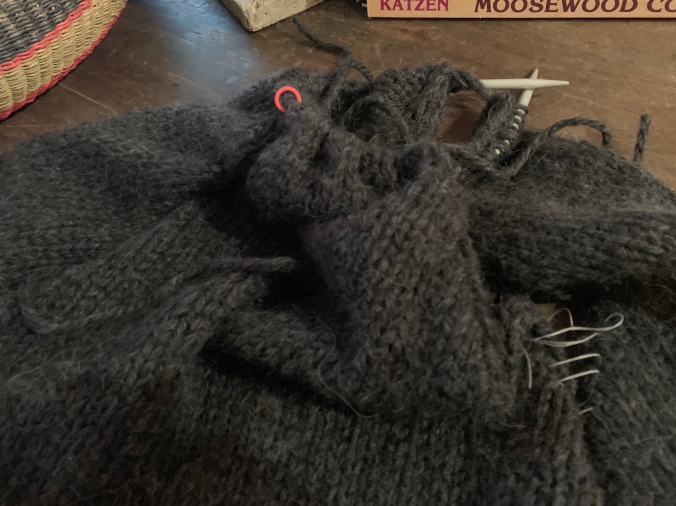 She made the drive to come over; that’s the way she is. My mom probably senses she was the original reason that I often found myself in the same sort of mess. She knitted us lots of sweaters when we were little, and I grew up assuming that I would need to eventually do the same if I ever really wanted her respect. She never said, or even implied that, of course – just my assumption.

She came with supplies – her favorite stitch markers, scissors and needles. I spread my completed knitted pieces out on the kitchen table.

“I always whip stitch it together at this point,” she said, “in a contrasting thread, just to get a sense of how it is going to fit.”

I had forgotten about that step. I wanted to motor on, get the neck done. But I also knew she was right. My impatience was a big factor in my lack of knitting progress over the years.

Less than an hour later, we called Andy into the kitchen to try it on. I sensed her doubt, right away, that she thought it might be too small.

“I don’t think there is enough ease in the arms,” she finally said, breaking up the silence.

“Can’t we just block it bigger?” I yanked on the knitted material to show her how soft and giving the alpaca wool was.

I could tell she was unconvinced.

“I really think we should add onto the sleeves.”

I looked at the already bound off sleeves, and then the clock, trying to will it backward. I remembered something I read about how people used to always reknit sweaters at the turn of the century to save resources. I reminded myself that this was a choice on my end, this homemade knitted sweater.

As I began to rip out the binding of one sleeve, a slow process, the sale rack of inexpensive cashmere sweaters dangled into my thoughts. I suddenly felt ridiculous for this undertaking.

What were we doing, laboring over this sweater? For what?  The yarn for it was more than the sweaters on sale, sweaters already bound together and ready to wear – in an instant. Handmade, in this century, made no financial sense.

My mom worked on the other sleeve. We finished about the same time and then started to knit more length in tandem. We were now two hours in, still not working on the neck. My husband started dinner and was cooking fresh Cod he’d picked up at the farmer’s market. All four of my boys had now joined the fray and circulated around the curiosity of my mom and me. My fifteen-year old decided he would start his Algebra homework, also at the table, and pushed the body of the sweater to the side. I was about to stop him—really, homework right here?– but caught myself. Jake sat down and decided it was a good time to test out the new blood pressure monitor.

“Nana, roll up your sleeve,” he told her.

Her well calibrated hands were immune to the commotion. Working with fabric probably resided somewhere deep in her brain stem. Sewing clothes was a frequent part of her childhood. I watched her fingers pick up stitches effortlessly. I knew those hands well.

We kept going but didn’t finish the sweater that night. Our first attempt at the neckline came out too small and we had to rip it out. By then, it was after eight pm and I wanted her to get on the road. The frenzy of getting the sweater finished, before Andy’s break ended, had slowly fizzled away. It was replaced with the reality that I was going to have to send it by mail. The next day would be busy with packing and all that departures entail – a good breakfast, last minute laundry, finding lost socks. Quiet in the upcoming weeks awaited; I would tackle it again soon when the kitchen table would be clear.

I accepted the failure of not getting it done by Christmas, justifying to myself that the almost finished sweater managed to accomplish something I hadn’t been able to for much of the holiday season. It forced me into some concentration and stillness. The novelty of the situation lured my boys from Fortnite. My mom got her own knitting supplies out after a long hiatus and was able to show off her skills to her grandsons. It was a way to spend time, on an otherwise ordinary winter night; time now marked on wool.

Of course, it barely needs to be written, nothing that I could buy.